Cult Film, “Birdemic: Shock and Terror” Will Be Released on Bluray With Tons of Extras!!! 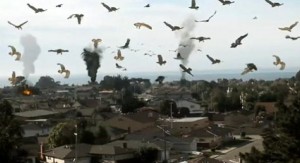 The ultra low budget film that attained cult status almost immediately is set to be released on February 22nd.  It is known as “Birdemic: Shock & Terror.  It will be released in hi-def and will be loaded with extras.

This movie is a ripoff of Alfred Hitchcock’s  “The Birds” and was produced for only $10,000.  It was written and directed by James Nguyen.

Here is the trailer for the film which should definitely make you want to purchase the film and have your friends over and watch this at midnight with tons of beer and food.

You can pre-order the film below by clinking the picture link.