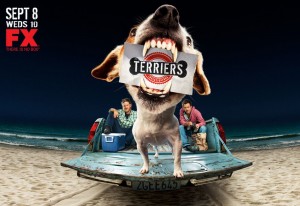 Major networks ABC and FX have cancelled some fan favorite shows with only giving them one season to start.  It is not uncommon to do this if ratings are not up, but I wish more networks would give tv shows a larger chance then what they get now.

ABC pulled the plug on “The Whole Truth” which was a legal drama show on primetime for very low ratings recently and hitting their personal low this past week.

FX also axed their much anticipated show, “Terriers” which were written by Shawn Ryan and Tim Minear of “The Shield” and “Angel” fame.  Terriers ended their season lower than any other episode they had, so I guess FX thought that would it should be axed.  Shwan and Tim have moved on to the new Fox crime drama, “The Chicago Code” which debuts early January.

I feel Terriers should have been extended.

One thought on “FX & ABC Cancels A Couple Of Shows!!!”