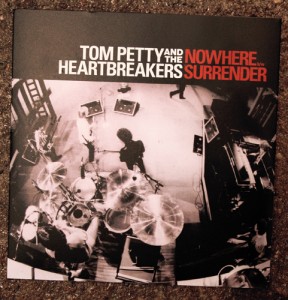 It’s a damn fine time to be a classic rock n’ roll fan this holiday season, what with all of the really cool box sets and deluxe editions coming out. Sure, I know what you are thinking. “Why in the f*ck should I have to buy these all over again?!?” You don’t, really, but where the record companies get you is the treasure trove of unreleased goodies that didn’t originally appear on the initial releases, like this Record Store Day ‘Black Friday’ exclusive release of Tom Petty & The Heartbreakers single, featuring the unreleased tracks “Nowhere” and “Surrender”.Tom Petty and crew recently released a deluxe edition of their breakout 1979 album “Damn The Torpedos”, including the aforementioned tunes as well as a bevy of other unreleased demos and live cuts from that era. If the tune “Surrender” actually sounds familiar to you, you might recognize it from The Heartbreaker’s recent “Live Anthology”, where Petty claims that the song was never recorded, to which drummer Stan Lynch pipes in “That’s not true, you just never recorded it well.” The joke is on you, Stan. This song sounds great, even in the bands infancy.

Some other worthwhile mentions of bitchin’ music available for the holidays is the two Rolling Stones Vinyl Remaster Box Sets, a MUST own. The first set spanning 1964-1969 while the other spans their catalogue from 1971-2005. Both are limited editions and have been selling like hot cakes!

Fans of The Who will enjoy the 40th Anniversary Edition of their monumental “Live At Leeds” album, featuring the full original concert, 2 discs of the intended release of their ‘Hull’ performance, now fully restored, as well as a 12″ vinyl of the original ‘Leeds’ release and replica 45 single. A deluxe 60 page hardbound book with detailed liner notes is also included, with a swanky slipcase of the album’s original artwork featured on the front.

Jimi Hendrix fans also have reason to rejoice with his first-ever career retrospective on the “West Coast Seattle Boy” 4CD/1DVD box set. This impressive collection features live and studio recordings from Hendrix’s days as and R&B sideman on the Chitlin Circuit, as well as many unreleased alternate versions of classic Hendrix studio and live recordings. The real gems of this collection may be his cover of Bob Dylan’s “Tears of Rage”, plus his acoustic demos of “Long Hot Summer Night” and “1983 (A Mermaid I Shall Be)” from his epic “Electric Ladyland” LP. Hendrix acoustic songs are rare to come by, which also makes this box set a must-have!

Speaking of Bob Dylan, who can forget his latest collection, “The Original Mono Recordings” box set, both available on CD and vinyl, collecting his first eight albums in their original mono mixes, the way they were intended to be heard! (Read my review about the vinyl edition here.)

Of course, I can’t forget you Beatles fans…most notably Paul McCartney’s reissue of his seminal “Band on the Run” deluxe edition with several different packages to choose from. Hard core fans might like the 3CD/1DVD edition with hardbound book or the remastered 2x LP edition. Or, maybe both if you are really a die hard fan. Apple Records fans can also get their hands on the label’s “Apple Records Box Set” containing a sizable collection of remastered studio albums from the likes of Badfinger, James Taylor, Billy Preston, Jackie Lomax and many more. The Beatles were than just the biggest rock band in the world, they were also keen producers and eyes (and ears) for talent, which can be heard and experienced in its entirety with this set. (Personally, I’m quite excited about the Jackie Lomax album, which has been hard to get since its original release.) There is also John Lennon’s “Signature Box” set collection all of his studio releases using his original mixes, as well as limited edition George Harrison/Ravi Shankar “Collaborations” box set, chronicling their most unique friendship and musical collaborations.

‘Boss’ fans…I shan’t forget about you. Bruce Springsteen’s “The Promise: The Darkness on the Edge of Town” deluxe box set is a superb collection of the original album alongside a collection of unreleased tracks and demos from that session, a time that proved to be quite prolific for the young and bourgeoning singer/songwriter. A 90 minute documentary features archive footage during the making of the “Darkness” album, as well as band interviews and reflections, a film that debuted at the Toronto International Film Festival in September 2010. (Click HERE to listen to a fantastic interview from NPR’s ‘Fresh Air with Terry Gross’, with Springsteen conducted by actor Edward Norton during the Toronto Int. Film Festival, talking about “The Promise”.)

There are also some other fantastic releases to be had this holiday season, including stuff you’ve probably have long forgotten about. You online shoppers know where to go. For those who still go to brick and mortar stores, please be sure to support your independent record stores, as well as your other independent retailers. These guys are what makes the world go ’round.

One thought on “Anything That’s Rock n’ Roll Is Fine…”