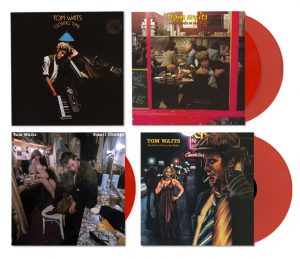 One of the coolest people on the planet will be re-releasing his first four albums on 180 gram vinyl.  And that person is known as Tom Waits.

It looks like they will be released just in time for Christmas.  The are set to be available on December 21st.

Now there are going to be two versions of each release.

The other version will be a standard re-issue on 180 gram black vinyl for each album.  These will sell at $24.99 each.

They are up for pre-order HERE at the Tom Waits Store or HERE at Rhino Records and through various retail stores throughout the country.

If you pre-order the albums before December 18th, then you will get them before Christmas according to the Tom Waits website.

Cannot wait to get the limited edition vinyls.