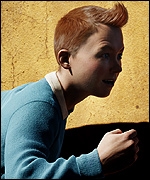 Steven Spielberg and Peter Jackson have finally lifted the curtain on the first real pictures of their epic big budget film, Tintin based on the comic.  They chose Empire Online to unveil these pictures.

It seems judging by the pictures that this technology is far superior than what is used on the Zemeckis CG films such as The Polar Express.  Tintin is looking more realistic and less cartoony.

It is an interesting comic to adapt into a film, but non-the -less it is full of adventure of epic proportions.  Click Here to find out more about Tintin.

In the pictures below you will see how amazing the technology they are using to make this film come to life.  This will be quite the release and I believe there will be three films total.

“With live action you’re going to have actors pretending to be Captain Haddock and Tintin,” says Peter Jackson. “You’d be casting people to look like them. It’s not really going to feel like the Tintin Hergé drew. It’s going to be somewhat different. With CGI we can bring Hergé’s world to life, keep the stylised caricatured faces, keep everything looking like Hergé’s artwork, but make it photo-real.”

Spielberg said, “The first part of the film, which is the most mysterious part, certainly owes much to not only film noir but the whole German Brechtian theatre — some of our night scenes and our action scenes are very contrasty. But at the same time the movie is a hell of an adventure.”

Simon pegg, Nick Frost, Daniel Craig, Cary Elwes and Andy Serkis will star in the film.  That is one hell of a cast.