The Ultimate Police Detective, Leslie Neilsen, Has Passed On…

Hi Folks, I’m here with some sad news.  Sad news that I heard last night as I was watching Pinocchio and working on the site and store.  Leslie Neilsen has passed away.

I will always remember when Leslie Neilsen came into my life.  it was the first time I saw The Naked Gun in the theater.  I was seven years old, and I remember laughing at this actor throughout the film and then for days after seeing the film, trying to say the hilarious dialogue whenever I could get a chance.  Not really understanding most of it, but I thought it was hilarious.

It wasn’t until several years later that I started watching Leslie’s earlier work which was not of the comedy sort at all.  I found he was quite the excellent dramatic actor.

The first drama film I watched with him was Forbidden Planet where he played Commander J.J. Adams.  The way he portrayed his character was brilliant.  The way he messed with Anne Francis throughout the movie and how he interacted with his crew was great.  And let us not forget he was in the serious film Ransom! which was remade with Mel Gibson and Ron Howard a few decades later.  Neilsen was amazing in that too.  And a mention of his roles in Peyton Place and Kung Fu on tv were excellent as well.

It wasn’t until Kentucky Fried Movie where Leslie became the legendary funny man we all know him as today.  Then after that, he was Dr. Rumack in the hilarious film, Airplane, which is one of the most quotable films of all time and might I say one of the funniest films of all time. 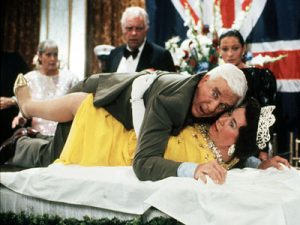 Then a TV show came about called Police Squad where he took the role as Lt. Frank Drebin.  This hilarious tv show would spawn three very successful films based on the tv show.  I remember laughing at about every joke with my parents even though I did not understand them at the time, but i laughed anyway.  I always loved these films.

And in the midst of these films he assumed the creepy asshole role in Creepshow which has always been a favorite, but the audience had spoken and loved Neilsen as the funny man.  He would go on to make Magoo, Dracula Dead and Loving It, and Scary Movie.

He was truly a master of comedy and acting.  And I could only imagine that he would have made a hilarious commercial for maybe SNL about the TSA rules of security nowadays.  Could have been AWESOME.

I will miss you Leslie and my thoughts are with your family, friends, and fans.