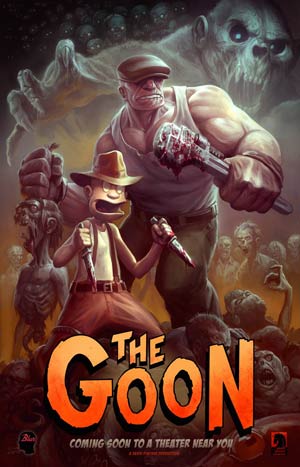 Dark Horse Comics‘ The Goon series by Eric Powell has always been such a special treat for fans of tongue-in-cheek horror comedy.  I really can’t get enough of The Goon and his unique zombieverse.  As quoted directly from Dark Horse’s Goon blog:

“Eric Powell’s The Goon is being developed as an animated feature film to be produced by ground-breaking filmmaker David Fincher, Blur Studio, and Mike Richardson at Dark Horse Entertainment.

The Goon movie has not been funded yet and the team is currently looking for a studio to snatch up the project and finance production, so get the word out there!

In the meantime, enjoy this proof-of-concept footage animated by Blur Studio and voiced by Paul Giamatti (Franky) and Clancy Brown (The Goon).”

Paul Giamatti voicing sidekick Franky is a stroke of pure genius, as I’m sure I’ll unconsciously hear his voice every time I read The Goon in print from now on.  I really hope a studio picks this up and really polishes this up into a fine animated movie, the trailer alone looks amazing…think of what they could do when this is greenlit!  Check out the trailer HERE.