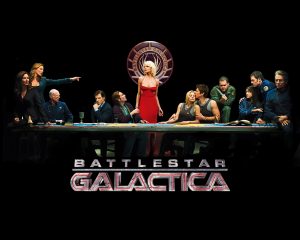 SyFy Network executive Mark Stern unveiled that there will be a TV MOVIE made  called “Battlestar Galactica: Blood & Chrome”.  It will follow a mid-twenties William Adama as he enters the decade old first Cylon War.

It is set to shoot in Vancouver sometime next year.

Mark Stern says: “When we read Michael’s script, it was so clearly a full-blown pilot for a series.  The scope is fantastic and bigger, I think, than anticipated, so we said, ‘Let’s do it as a 2-hour backdoor pilot.’ … We’re trying to get up and running as soon as possible.”

I am excited to hear this news.  Any BSG news is great news.  I’m curious as to how many characters we will see from the BSG series in their younger from.

Plus Mark Stern said that the show Caprica is on the edge.  November 15 is the date we will hear by if the show will be no more.