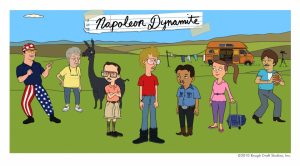 It’s official.  Fox has ordered a series based on the indie comedy, “Napoleon Dynamite”.

Fox has picked up six episodes of the show, with the original cast on board as voice talent — including Jon Heder as the title character.

With “Dynamite,” the comedy follows the misadventures of an awkward high school teenager and his quirky friends as they struggle to navigate life in rural Idaho.

This show could go either way.  I would love to see a sequel rather than a cartoon, but hopefully this show will do well.