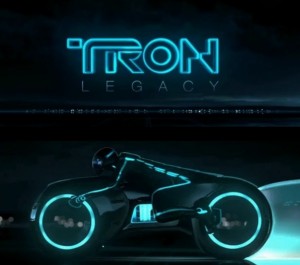 Well Avatar did this and it must have worked very well, so on October 28th IMAX theaters will be hosting “TRON NIGHT” which feature 20 plus minutes of the new Tron film.  Tickets will be available starting tomorrow Tuesday the 12th through various internet sites.  It will be dubbed Tron Tuesdays which this will be the first one of many up until the actual release.

Below is an official press release detailing information about the Tron Tuesdays.  I am looking forward to the next Tron Film.  How about you?

BURBANK, Calif. (October 10, 2010) —Walt Disney Studios announced today, October 10, 2010 (“10-10-10”), the kickoff of the official 10-week countdown to the release of “TRON: Legacy,” which opens in theaters December 17, 2010. Every week for the next 10 weeks marks a major milestone in the countdown as The Walt Disney Company rolls out exciting new TRON events, film content, products and announcements in preparation for the worldwide film launch, including:

TRON Night: An IMAX 3D Experience, a special event on October 28, 2010, that will give audiences worldwide the first opportunity to step onto the Grid and into the cutting-edge, 3D world of Walt Disney Pictures’ high-tech adventure “TRON: Legacy,” during an exciting 20-plus-minute sneak peek of the highly anticipated film, sponsored by Asus Computer International.

Greg Foster, Chairman and President of IMAX Filmed Entertainment, is equally enthusiastic. “We are ecstatic that the Disney team and the ‘TRON: Legacy’ filmmakers elected to debut this amazing footage exclusively in our network of theaters,” said Foster. “This first-look in IMAX 3D is the most immersive way to bring audiences into the world of ‘TRON: Legacy’ and kick-off the countdown to the film’s highly-anticipated launch.”

Tickets to the October 28th TRON Night events are free and will be distributed for US and Canadian screenings on a first-come, first-serve basis starting 10:00 a.m./PDT on the first “TRON Tuesday,” October 12, 2010. Information for U.S. and Canadian ticketing can be found on Facebook.com/TRON.

** Beginning today, fans have the opportunity to purchase tickets to select IMAX 3Dmidnight screenings of “TRON: Legacy.” Tickets may be purchased at all participating IMAX locations and online at Disney.com/TRON.

** “TRON Tuesdays”— every Tuesday for the next 10 weeks, exclusive new video and film content, including behind-the-scenes exclusives, trailers and artwork, will be released around the world online and through select broadcast outlets. To get the latest on “TRON Tuesdays” and more, visit Disney.com and Facebook.com/TRON.

**“10-10-10” also marks the launch of Disney.com’s TRON: Get on the GridSweepstakes, featuring hundreds of prizes including a Grand Prize Trip for four to experience ElecTRONica, the new street celebration at Disney California Adventure™ Park. Details and official entry rules are available at Disney.com/TRONsweeps.

ADDITIONAL HIGHLIGHTS OF THE 10-WEEK COUNTDOWN:

** In addition to new merchandise arriving to stores this month, Disney Consumer Products will debut exciting, new “TRON: Legacy” products and promotions, including a special line for women, a one-of-a-kind immersive retail destination for products and a unique gadget line for music and gaming fans.

Disney Parks is celebrating “TRON: Legacy” with ElecTRONica, a nighttimestreet event at Disney California Adventure™ Park, featuring a dynamic visual- and music-based experience, a re-creation of Flynn’s Arcade and an opportunity to see a special 3D preview of “TRON: Legacy.” ElecTRONica runs from now until April 2011 every Friday, Saturday and Sunday night and nightly through the Thanksgiving and Christmas holiday periods.

Information on all TRON activities can be found at Disney.com/TRON.

“TRON: Legacy” is a 3D action-packed adventure set in a digital world unlike anything captured on the big screen. Sam Flynn (Garrett Hedlund), a rebellious 27-year-old, is haunted by the mysterious disappearance of his father Kevin Flynn (Oscar® and Golden Globe® winner Jeff Bridges), a man once known as the world’s leading video-game developer. When Sam investigates a strange signal sent from the abandoned Flynn’s Arcade—that could have only come from his father—he finds himself pulled into a world where Kevin has been trapped for 20 years. With the help of the fearless warrior Quorra (Olivia Wilde), father and son embark on a life-or-death journey across a visually stunning universe—created by Kevin Himself—which has become far more advanced with never-before-imagined vehicles, weapons and landscapes, and a ruthless villain who will stop at nothing to prevent their escape.