I’m on my way to New Vegas. Fallout Review

I was an addict of Fallout 3. I loved roaming a huge blasted landscape while listening to old time music. I loved choosing between being good, warm and kind and dastardly evil. At times getting to make decisions where either 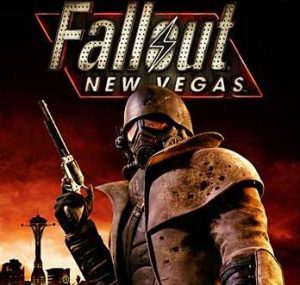 way your hands are dirty. I was excited by the notion of taking that game engine and those game elements and throwing it from DC to the vicinity of Sin City.

New Vegas delivers what I wanted, but probably doesn’t do enough to win you over if you played and didn’t enjoy Fallout 3. In FO3 it was set up in a way to really encourage two playthroughs, one where you’re a good person, another where you’re bad. Things are more complicated in New Vegas, which adds some interesting options, but I don’t know that it’d really encourage a third play through. You do get to pick between being good and being evil, but you can also pick a side on various rivalries between factions. Another option is called “hardcore mode” where bullets count against your maximum inventory weight and anything that heals you takes time to heal preventing you from rushing in like Rambo and at the last moment hitting the B button shooting up a stimpack. Though all that might keep things feeling fresh, it seems like it’d still just warrant two playthroughs. FO3 you’d play through once as a good guy, a second as a bad guy. FONV you play through once as a good guy on one side of the faction rivalries, then a second time as a bad guy on the other side of the faction rivalries with hardcore mode active. I do imagine the result would be the second play through feels very different than the first, so that’s good.

The story is fun, the side quests are excellent and varied. There was a quest that was a bit tedious as I repeatedly ran laps from a basements top floor to basement. The building was dark and labyrinthine and eventually there were no enemies left to kill, so it was just me getting lost looking for the door the top floor over and over. But that happens. The biggest beef with the game is one that will be remedied the longer you wait for the game. There are bug and glitches. My first attempted playthrough involved me waiting through the opening cinema then it was time, I selected “start new” and the game froze on the loading screen. Quite an auspicious start! I did get it going had a couple of in game crashes that reminded me that I needed to save more often just in case. Fortunately a patch came out that has hopefully fixed much of that. Post patch I still had a situation where my character got stuck in a rock, I tried to “fast travel” to get unstuck and it informed me that I couldn’t as I was either falling or jumping.

Despite flaws (that will likely be resolved) I highly recommend this game. So much bang for your buck. Some people have referred to it as “just an expansion” or the like, but with how big it is, how many hours can be sunk that’s baseless. It uses the same engine, but few of the enemies have been carried over, and those that did look prettier (or uglier in a good way), none of the same characters (so far) and it’s a completely different map.