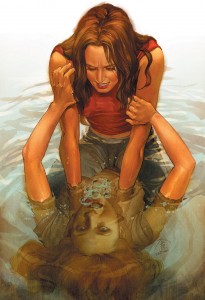 The TV series  may have ended but Joss Whedon continued the series in comic book form right where season 7 left off.

Season 8 of the Buffy universe debuted a few years ago and it is pretty spectacular.  Great storytelling and artwork.  Now it is getting the motion comic treatment on bluray and will be released on January 4th, 2011.

No extras have been announced but Fox says trivia, artwork galleries, and featurettes will most likely make it to the release.

Very excited about this.  Love me some BUFFY.

Click HERE to head to the Boomstick Store and get all your BUFFY items.