Bryan Senses Some Paranormal Activity and Gets Frightened (Review) 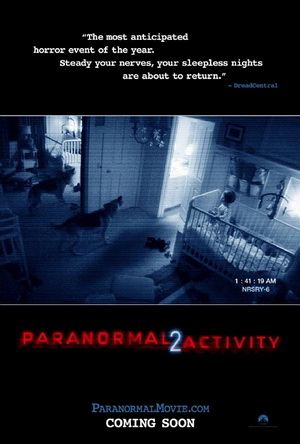 Hi folks, Bryan here with my review of Paranormal Activity 2.

I really expected to come out of the theatre with somewhat dissatisfaction after seeing PA2.  Going into the film, I was excited but, also nervous in that the first PA film was so tense and creepy and was only made for like $15,000 dollars and that it would go on to be the most profitable film of all time.  You know with that statistic there was by no doubt going to be a sequel.  But like so many sequels, most of them fail because they get a bigger budget and it does not become about the story or characters anymore, but rather throwing tons of money into it and having high tech special effects, and zero plot line.

But after seeing PA2, you could say that I loved it and I was more than a little scared coming home last night.  I’m going to try and write a spoiler free review, but sometimes some people’s view on what is a spoiler and what is not is different.  So if you do NOT want to know ANYTHING about this film, then do not read on.  That is your WARNING.

Much like its predecessor, PA2 employs that famous camera shot that is placed in a corner and looks out into the house with the titles “NIGHT 1”.  I found myself once again scanning these shots all over the place to see if something moves or if a light turns on, or if I see a shadow.  Very creepy.

In the first PA film we are introduced to two people, Katie and Micah who have strange things going on in their house that are unexplainable.  Now if you are like me , you really thought these characters were annoying and let’s face it, not to sad when they bit the dust.

But in PA2 we are introduced to a family: a father, step mother, a teenage daughter, a baby, and a protective dog.  They are a fun loving family and you actually like them.  They are funny and sweet and they do not seem to be mad at each other in any way.  Also, like the camera shots that I explained before where the camera is posted up in a corner for a long period of time, well there are about 7 or 8 different cameras set up in this house due to a break in early on in the film.  They are security cameras.  This heightens the terror on multiple levels, because not only do we see something creepy from only one angle, but we see it from several, and how it continues on through out the house.

So soon after we establish the family and the home layout, the original star of the first PA movie shows up which is Katie and we quickly know what remember how she looked the last time we saw her.  You find out that she is the sister of the stepmother of the house we are in.  Katie mentioned her in the first PA movie when she was talking about how this entity or demon was haunting them as children.  The couple asks where Micah is, and she brushes it off with an answer like, “Oh, he is, well, not feeling social today.”  Oh Shit!

But when Katie comes over again, Micah is with her and a title comes up on the screen that says, “60 days before Micah Sloat is Killed”.  WOW.  It is a prequel.  I thought this was a very clever and AWESOME idea.  It works so well.  So this whole film is before anything has happened in the first PA film, but it is around the same time that creepy shit starts to happen with Micah and Katie.

so much like the first PA movie, the first few nights, “Night 1 – Night 2 – Night 3” are spent looking around at what the various security cameras are recording to notice small occurrences, but it seemed much more terrifying and menacing.  Maybe it is the fact that it s a family with kids and a baby.

The acting is superior in this film which helps sell this movie even more as being real.  And the fear seems to be genuine.

Another very cool moment in the film is that we see how these two paranormal events from the first film and this one are linked.  A very good job on how it was executed.

This movie did scare me, much like the first film did.  I could even say it is scarier than the first film.  The pacing is right on, and the scares are plenty and creepy.  You will most likely scream out loud a few times during this film.  The tension made me sweat throughout the entire movie which is very difficult for any movie to do.  It is great story telling when you can build tension throughout an entire movie and never let it fizzle out.

So definitely bring a date to this movie and expect your arm and shoulder to be clawed up by someone you love who is freaked out by watching Paranormal Activity 2.

I highly recommend it.