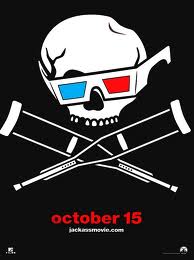 For more than ten years now, these guys have been physically abused on and off camera for our enjoyment.  Before that it was Bam doing his CKY videos which were mostly skateboarding, but with JACKASS like skits intertwined.  It was not until Bam Margera, Johnny Knoxville, and Jeff Tremaine got together and JACKASS was formed.

Over the years we have seen these guys use their bodies as targets for guns, we have seen them eat poo, and use themselves as live bait for sea creatures, and much much more.

I believe these guys do a lot of good.  They take people’s fears; rather it be heights, getting stung, or hit in the face, or eating creepy things, and show you it is not only fun and hilarious, but that your fears can be conquered.  They are non discriminate and accepting of everyone.  They are good people and great at what they do.

These films are consistently funny and they are all in my top comedy films of all time.

So after 10 years we get a third JACKASS film in 3D no less.  Yes it is the same camera used to film AVATAR, so the entire film is in 3D.  And let me tell you, this movie is what 3D is made for.  These guys, despite their aging, have not lost their step and edge.  They take brutal shots to the face by various objects, fall from 60 foot trees, and much much more.

Also to open up the film, two great american icons open up the film that have not been on the big screen in quite some time.  It was a true pleasure to see them again and hopefully they do another movie.

This movie is a hilariously funny film and I can only hope for more.