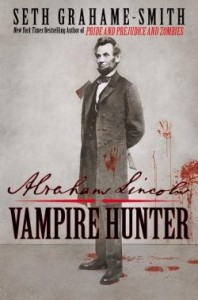 Writer Seth Grahame- Smith known for his novel, Pride Prejudice and Zombies also wrote a novel called Abraham Lincoln: Vampire Hunter.  20th Century Fox has acquired the rights to make this into a film in which Seth has already written the screenplay.

Pre production is already underway and the budget is right around $70 million dollars and will be in 3-D.

Fox did all they could to win this one, presenting a detailed pitch for the production, marketing and release of the picture. Beyond that, they one-upped other studios by putting on an elaborate presentation to impress the filmmakers: huge banners hung over the studio lot; parking spaces read “Parking for Vampire Hunters Only, Park at your own risk.”; bloody footprints led them to the meeting; silver bullets and bloody axes were placed around the offices; and so on.

Timur had to say this about the film:

“It is not a comedy at all – it is a very entertaining, epic history lesson for millions and millions of teenagers. If you remember Night Watch, it is maybe in the vein of that kind of movie. We are keeping the traditional look of Lincoln – the big hat and the beard. He has to be historically correct, but with a few special weapons.”

And here is Publisher’s Weekly mini review of the book:

“Seth Grahame-Smith inserts a grandiose and gratuitous struggle with vampires into Abraham Lincoln’s life. Lincoln learns at an early age that his mother was killed by a supernatural predator. This provokes his bloody but curiously undocumented lifelong vendetta against vampires and their slave-owning allies. The author’s decision to reduce slavery to a mere contrivance of the vampires is unfortunate bordering on repellent, but at least it does distract the reader from the central question of why the president never saw fit to inform the public of the supernatural menace.”