Judd Apatow will be Making a New HBO Series 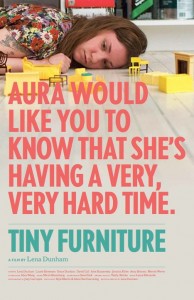 Judd Apatow of “40 Year Old Virgin”, “Knocked Up”, and “Funny People” fame will be bringing a pilot episode for HBO. There is no name for this project yet.

The show will come from 24 year old Lena Dunham who wrote, directed, and starred in the award winning film “Tiny Furniture”. It won top prize as SXSW festival this year. The movie will come to theaters in November.

The Village Voice said this about the movie: “Tiny Furniture earned the 23-year-old Dunham comparisons to Woody Allen. She’s a gifted comedienne, eager to plum her insecurities over her imperfect physical appearance for both poignancy and laughs—I’m not sure I’ve seen a film that so accurately and unblinkingly depict what it’s like to feel unattractive.”

Lena will write, produce, direct and star in the pilot episode. It will be “about the assorted humiliations and rare triumphs of a group of girls in their early 20’s,” according to Deadline.

The trailer for “Tiny Furniture” can be found HERE.

I am looking forward to this.

If you have never seen “Freaks and Geeks” then seriously pick up the one season series below.  You will re live your high school years.  It is one of the best tv shows ever to be broadcast.