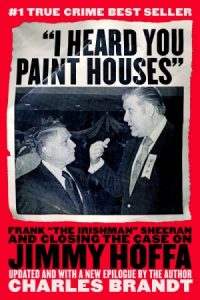 Michael Fleming over at Deadline is reporting that Pesci and Pacino are in talks to be a part of Scorsese’s next film which will be entitled “The Irishman”. It is based on the book “I Heard You Paint Houses” by Charles Brandt. The movie would follow the life and times of the mob hit man Frank “The Irishman” Sheeran. Amongst all of his mob related crimes he might have had a hand in the killing of Jimmy Hoffa. It also looks like Robert De Niro will be starring in the picture as well. He and his film company, Tribeca Productions are developing the film.

De Niro said this about the movie: “We have a more ambitious idea, hopefully, to make it a two-part type of film or two films…It’s an idea that came about from Eric Roth to combine these movies using the footage from ‘Paint Houses’ to do another kind of a [film that is] reminiscent of a kind of ‘8 1/2,’ ‘La Dolce Vita,’ [a] certain kind of biographical, semi-biographical type of Hollywood movie — a director and the actor — based on things Marty and I have experienced and kind of overlapping them.”

If this happens with all these people, then this might be the best gangster film since Goodfellas.