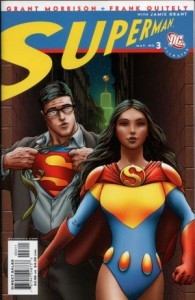 Finally an All-Star comic Title is getting its much deserved attention to video.  All-Star Superman will be one of those PG-13 straight to video animated releases.  If you have seen some previous ones then you know how BADASS as they are.  So much time and love go into making these animated movies.

In my opinion, Morrison’s All-Star Superman tale is one of the best Man of Steel stories I have ever read.  It is up there with Alan Moore’s Superman story “Whatever Happened to the Man of Tomorrow”.

The book is basically about how Superman copes when he realizes an overdose of radiation will soon kill him.

And Oh My…do they have a stellar cast of voices lending their talent.

Linda Cardellini (“Freaks and Geeks”) and Arnold Vosloo (“The Mummy”) are also in the voice cast.

Dwayne McDuffie, who did a spectacular job scripting “Justice League: Crisis on Two Earths,” is penning the script for this one also.

Going to be AWESOME!  Now we just need a rated “R” All- Star Batman and Robin.