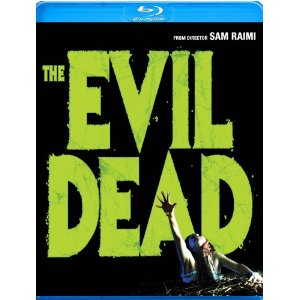 The Movie: The epic legendary film that spawned Evil Dead 2 and Army of Darkness and gave the world Bruce “Man-God” Campbell.  Riddled with humor, genuine scary moments, and buckets upon buckets of blood and gore bring you this amazing achievement in movie making.  This marks the directorial debut of Sam Raimi.  Known to most as the director of the Spider-Man movies.

This movie was made on a budget that would equal the coffee supply on a James Cameron movie for one day.  It was made with friends and family over the matter of twelve weeks and sometimes only having a crew of five people and that was including actors.  Sam’s creative use of the camera and genuine talent for terror blasted this film to cult status quickly.

The story you have seen and heard a million times before.  Group of college kids got to a remote cabin in the woods for a weekend for some fun and romance and they unearth a horrible EVIL that possesses the living into flesh eating cannibals who can fly.  The only way to kill one of these undead people is by total dismemberment.

Our hero of the movie is not your typical hero.  He is a man played by Bruce Campbell named Ashley Williams who works at S-Mart in the housewares section.  Just a regular guy who basically gets tortured throughout the movie.

Bruce Campbell and his chin are fantastic throughout this film and the two that followed.  He brings his charm and one liners that have stood the test of time and will continue to do so.

Evil Dead deserves the most consideration and adoration.  Not only because it was made by friends on a cheap budget, but for how creative everyone was with what they had and how it is a genuine awesome film in every way and still continues to be one of the scariest films and goriest films of all time.

The Packaging: Brought to you by Anchor Bay in this Limited Edition bluray/dvd 2-disc set, the bluray is on BD50 and the second disc has all of the special features.  Once at the great full motion menu screen you can choose between two aspect ratios.  1.33:1 and 1.85:1.  One is enhanced and one is not.  The enhanced one, well, enhances the original copy so it is not so shaky.  But you know the shakiness of it all makes it that much better.

The Picture and Sound: This is by far the best copy of this movie I have ever seen and heard and believe me there has been tons of releases of this movie.  The blacks are incredibly deep and accurate and shadows are better than expected.  There is still grain but by no means does it take away from the picture itself and it adds to the gritty cinematic experience.  There is excellent saturation in color throughout the film and this is a prime example of how HD transfers should be.  I’m speaking to you “Asshole” George Lucas.  The vocals are beautifully precise and clear and never overwhelmed by stinging loud pops or action scenes.  The off screen atmospheric sounds are astounding and gives the film it’s frightening presence.  For fans of this film, this truly is the ultimate edition to own.  Again, it has never sounded or looked this great.

The Extras: Anchor Bay releases a 2nd disc of features that could be found on all the previous discs before.  Sad I know, but this tells me that this is not the final all Ultimate Edition of Evil Dead we will see.  Quite a bit of fun in these extras.

The only thing new on here is on the blu ray disc which has new commentary with Bruce Campbell, Sam Raimi, and Rob Tapert which is exclusive to this bluray release.  Now if you have not heard Bruce Campbell commentary before, his commentaries on movies are legendary.  They are roll on the floor laugh out loud funny.  It is a highly informative track that covers funny anecdotes and the horrors of making this film over four years.  I will say this is not the funniest commentary I have heard for it, but it is worth it.

A 54 minute documentary of interviews of some of the cast and other filmmakers of the horror genre weigh in on their love for the movie.  It is called “One by One We Will Take You: The Untold Saga of The Evil Dead”.  You will see some very cool behind the scenes acting and flubs, the history of making the movie, and the reaction to the movie upon release.

Next is “The Evil Dead: Treasures from the Cutting Room Floor” which is an hour long of deleted scenes and alternate takes which some I have never seen before.  some really cool gory stuff in here.  A must watch.

Then onto “The Ladies of the Dead Meet Bruce Campbell” which is where Bruce sits down with the three ladies of the film in present time and discuss the making of the movie.  Tons of hilarious anecdotes and confessions are made here.  Very entertaining. This runs about 30 minutes.

Next is “Discovering The Evil Dead” which is a cool feature that tells in 13 minutes how this movie made history and went on to success.

Next up is the 20 minute “Unconventional” which has the stars joined by Rob Tapert and Ted Raimi now and shows them discussing their insights and careers in the horror genre.  Really great watch.

The 12 minute “At the Drive-In” extra shows the entire cast at an outdoor screening of Evil Dead in Chicago giving away dvds to fans who answer trivia.  Pretty funny.

This 30 minute “Reunion Panel” is an extension of the previous extra which is basically a Q&A session.  Great great stuff here.

This short two minute feature entitled “The Book of the Dead: The Other Pages” shows Ash looking through the entire book and seeing every page.  Really creepy and cool artwork you have never seen.

An even shorter 1 minute make up test is shown.

Trailers of the film.

This is a must own for any fan of the horror genre or Bruce Campbell fan.  This bluray looks tip top and I am looking forward to showing friends this after midnight.