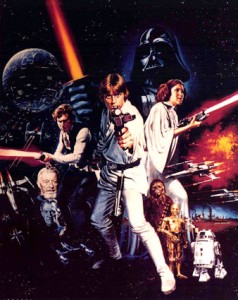 I am sure you have heard of ILM before or at least seen it in the credits for just about every movie made.  It is the amazing effects company started by Star Wars creator George Lucas 35 years ago.  It was started to create the effects for Star Wars and quickly became the premiere effects company in Hollywood and is virtually in every film in some form or another.

So the Encore movie channel will be airing a documentary in November about the ILM company.  It will be narrated by Tom Cruise and will feature interviews by major actors and directors.

Leslie Iwerks’ documentary takes audiences behind the scenes at ILM with in depth interviews with some of the company’s top talent and showcases never before seen footage highlighting many of their pioneering milestones. From creating the first ever computer generated character in a feature film to the latest advancements in visual effects for film franchises like Transformers and Iron Man, ILM has created some of the most memorable movie moments in recent history.

Industrial Light & Magic (ILM) is a division of Lucasfilm Ltd. and was founded by George Lucas in 1975 to create the visual effects for his space epic Star Wars. The studio originated in Van Nuys, California but moved to San Rafael, California to work on The Empire Strikes Back and is now headquartered at the Letterman Digital Arts Center in the Presidio of San Francisco with a sister studio in Singapore.

ILM has worked on nearly 300 films in its 35 year history and has largely been the driving force behind the evolution of modern visual effects.  From the liquid metal man in Terminator 2: Judgment Day to the lifelike digital dinosaurs in Jurassic park, ILM has created some of the most iconic moments in cinematic history.

ILM has received 15 Best Visual Effects Oscars and 25 additional nominations. It has also received 23 Scientific and Technical Awards from the Academy of Motion Picture Arts and Sciences in recognition of the critical role the company’s advances in technology have played in the filmmaking process. ILM is also the only entertainment company to be recognized with the National Medal of Technology.

I just hope it is an depth look at the company and not a broad view of it.  I will be recording it.