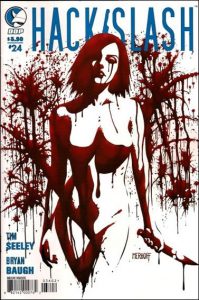 A movie based on the comic has been in development hell for the last two years.  Stephen Susco who wrote the remakes of the Grudge films has been writing an adaptation for the last year.  The live action version is still trying to get made, but Matt Pizzolo (Godkiller) is bringing the Illustrated film version to us much sooner than the live action version.    There is really no info about what issues it will cover or what it will be about.

To review Tim Seeley’s comic features Cassie Hack, “an attractive, yet tough-as-nails, fearless loudmouth” who was a final girl-style survivor of a violent attack and now undead and human slashers with her hulking, gasmasked partner, Vlad.

The film version was originally to be written by Justin Marks and directed by Todd Lincoln, but Lincoln was replaced by Swedish director Fredrik Bond, and Stephen Susco was hired to write/rewrite. Those new hires were both in 2009, and there’s been no real word on the film since.