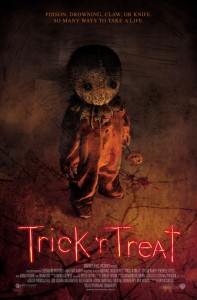 So I finally got to take a look at the horror movie “Trick ‘r Treat” and if you know me, then you know I am a cinephile.  Meaning I will see pretty much everything and also that I have a large affection for everything HORROR.  Over the last several years, it has been difficult for me to thoroughly enjoy a great horror film.  There are only a few exceptions.  I do not know if it is my childhood love for Halloween or my extreme passion for everything Horror, but this movie “Trick ‘r Treat” is the best Horror film to come out in years.  Now that is something to take notice of coming from me.

I really didn’t know anything going into this film other than it was a horror film about Halloween and that it followed several story lines and all connected at some point during the movie.  Kinda like “Pulp Fiction”.  I was hoping for genuine scares, comedic moments, blood, excellent death scenes, and even more blood.  I can safely say, that I received all of that plus more.

Trick ‘r Treat is basically a throwback to old Halloween Horror films and the traditions and holiday rules we all have grown to know.  It covers it all in this movie.  It connects several stories through out the movie through a very creepy little villain who is not named, but wears a scarecrow mask.  This little villain is so frightening that he will instantly haunt you for years to come.

We follow a group of spunky college girls, a psychotic principal, a horrific school bus  accident, a mean spirited child prank, a newly wed couple, and an old man’s strange intruder all with one directive.  Do not break the rules of Halloween.

This has quite a spectacular cast.  Brian Cox and Anna Paquin lend their talents to this film as well as several others you will recognize here and there.  The actors really helped this movie take it to the next level.

I cannot believe this film was not given its due date.  Only released straight to home video, this movie should have had a better marketing team and gotten into every theatre at the Halloween time.

I really have nothing to complain about in this movie.  It was everything I wanted in a horror movie.  This film will be a staple of horror film marathons and played round the clock come Halloween time.

See this movie as soon as you can and let me know what you thought of it.  I loved talking about his movie after I watched it.  Every single detail about it.  It was a hell of a lot of fun.