Bryan Has A Ball With Machete (Machete Review) 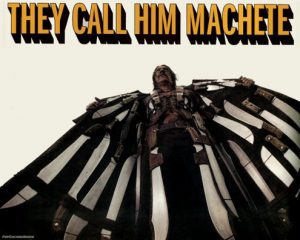 Just a warning before you read this review.  This review has a few minor spoilers in it so stop reading if you do not want to know anything about “Machete”.

Ever since Grindhouse was released and the world was given the ever so small glimpse of “Machete”, I knew I wanted to  see it as quickly as possible.  After hearing about the casting decisions, I wanted even more to see this film with Robert De Niro, Michelle Rodriguez, Steven Segal, Jeff Fahey, Jessica Alba, and Don Johnson lending themselves to this “fun as hell film.

Now I really enjoy most the films of Robert Rodriguez including: El Mariachi, Desperado, Sin City, Dusk Till Dawn, and his segment of Four Rooms, but I really do not care for Once Upon a Time in Mexico, or the Spy Kids films, Sharkboy, or Shorts all that much.  So I was just a tad bit uneasy that “Machete” would fall into the latter category of films I did not like.  Well safe to say, that “Machete” falls into the films I love.

It’s time of release has been coincided with Sylvester Stallone’s “The Expendables”.  Now Sly made Expendables with trying to make it realistic and true to nature whereas “Machete” is far from that.  It is a work of complete off the wall awesomeness and far from reality which makes it that much better.

Now you should know that “Machete” has balls to the wall gore throughout the film and naked women.  One of those naked ladies is Lindsay Lohan.  But you will get to see tons of decapitations, bloody head shots, tons of entrails, amputations, and a gigantic heap of machete kills.  Even at one point “Machete” guts an evil doer and pulls out his intestines and jumps out the 4th story hospital window and swings into the 3rd story window on the intestines.  That was an “OHMYGOD!”  and there are plenty of those.

Danny Trejo was born to play this role.  He moves through each frame with such a cool swagger that it looks like the whole film was shot in slow motion.  Trejo just owns this movie.  And his surrounding supporting cast is just as good.

Steven Segal plays the evil man which is out of the ordinary for Segal, but Segal plays this role so easily and it makes me wonder, why he hasn’t been a horrible villain more often.  He is great as a villain.  I must say that Segal’s death is one of the best and funniest deaths I have ever seen in a film.  It made me laugh hysterically.

Cheech Marin well is Cheech Marin and has the best dialogue exchange with Trejo in the entire film.  Cheech is just a great character actor and it shows along with Fahey’s evil republican role.  They just do such a great job of it.

Now what would a Rodriguez film be without the us of make-up artist legend Tom Savini.  Yes.  Savini might have the best cameo roles ever.  Right up there with Bill Murray in Zombieland.  You might remember Savini as “Sex Machine” from Dusk Till Dawn.  The character with the gun attached to his privates.  Well Savini in this film plays “Osiris”.  A very skilled hardcore hitman.  Every scene with “Osiris” is gold.  Let us hope they make a spin-off movie of “Osiris” or at least a sequel to “Machete”.

This film’s reason is to make an excellent exploitation or should I say “Mex-ploitation” film that takes one hardcore badass seek his vengeance and justice through the evil people of the world.  Simple as that.

Loved it and am looking forward to more.

6 thoughts on “Bryan Has A Ball With Machete (Machete Review)”