A War is Brewing in the Film Industry 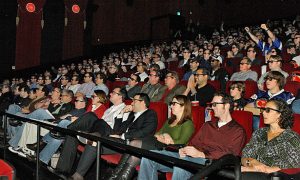 We go to the movie theater for the same reason we go to a ball game. It’s not just to see the main event. We do it to smell the smells, devour greasy food, relax with friends and family, escape the everyday, and experience camaraderie with perfect strangers. The laughter, fear, anger, sadness, and joy expressed by the collective magically heighten the experience of the individual.

But something wicked this way comes.

theaters. Instead, they want to be able to provide video-on-demand

five weeks after theater release. It will only cost you $24.99 per

movie. Also the FCC (which I think should NOT exist) are going to

through video-on-demand systems from being copied.

This is outrageous. First, if you implement software technology to

prevent movies from being copied, within a couple of weeks, people

will develop ways to get around your technology. You will never be

able to completely prevent pirating. EVER. Don’t fight it, find a way

to work with it. The home video industry still makes tons of money

even while pirated copies are being made.

Movie studios are justifying the quick release of movies on-demand

within the first 30 days of release. These numbers, however, fail to

aware of this risk. In an effort to protect their economic interests,

they have threatened litigation against the movie studios.

Since there is a market for physical copies of DVDs and blurays, I

don’t think they should change the model.  A physical copy of anything

is much, much better than a movie streaming online (although

admittedly I am biased since I am a professional collector). But most

importantly, I don’t want to see the death of the movie theater. It is

an important part of our culture – an experience that we should

Brooke Barnes from the New York Times wrote this article about the upcoming movie industry war.

SOMETIME in the next few months, there is likely to be an explosion in the movie business. The question is which studio will detonate the bomb.

Tension between studios and theater owners has been simmeringa long time, but it intensified in May, when the Federal Communications Commission issued what appeared on the surface to be an arcane ruling. After two years of prodding from Hollywood, the F.C.C. agreed to let movie studios activate technology to prevent films sold through video-on-demand systems from being copied.

Ho-hum? Hardly. The ruling gave studios the ability to pursue a new business — so-called premium V.O.D. — that may be the industry’s best hope of restoring itself to health, now that the bottom has fallen out of the DVD market.

The business opportunity is multifold. With as much as 80 percent of that early V.O.D. revenue going to the studio, movie executives see a new engine to compensate for the sputtering DVD. And for the studios, the need is urgent: DVD sales for the year are expected to total about $9.9 billion, down 30 percent from their peak in 2004, according to Adams Media Research.

Studios also want to cut marketing costs by interweaving advertising for theatrical, DVD and video-on-demand releases; reducing the exclusive “window” given to theaters would make it easier to combine those campaigns. Premium V.O.D. would also bring greater consumer awareness to regular video on demand, which has not caught on as much as other rental options like Netflix, according to a research report by Anthony DiClemente, an analyst at Barclays Capital.

Last but not least, studios are aware that consumers are growing impatient about being unable to access all movies whenever and wherever they want. Layering in an early video-on-demand option might prevent some of those frustrated customers from turning to pirated copies.

“There are people who we believe would like to see movies sooner than later and would pay a premium price to do that,” Robert A. Iger, the chief executive of the Walt Disney Company, told analysts on a conference call last month. “We are going to become aggressive.”

Cable and satellite television providers like Time Warner Cable (which is no longer connected to Warner Brothers) and DirecTV are ready to push the button on premium V.O.D. as soon as they reach a deal with studios. After all, the service would represent another revenue stream for these providers and another way to differentiate themselves with customers. The promise of the new business is one reason that Comcast is so eager for government regulators to clear its deal to take control of NBC Universal, analysts say.

SO what’s the problem? DVD retailers, for a start. The likes of Best Buy and Wal-Mart“have told studios they will retaliate against anyone who tries early-release V.O.D. because of the threat it poses to DVD sales,” Richard Greenfield, an analyst at the financial services company BTIG, wrote in a research note last Monday.

But the real wrath will come from theater owners, who have made it clear that releasing a movie early on video-on-demand services — thus cutting into their window — would be the equivalent of declaring war. Over the summer, the National Association of Theater Owners took out full-page ads in Variety and The Hollywood Reporter making its opposition clear.

The worry for theaters, of course, is that people will be more reluctant to buy movie tickets, at an average cost of almost $8, if they know they can catch the same film just a few weeks later in their living rooms, and for less money than it costs to haul the whole family to the multiplex. Considering that the average moviegoer spends more than $3 on popcorn and soda and the like, the cost of Friday night at the movies for a family of four can easily reach $45 — or much more in cities like New York — even before premium-priced 3-D screenings or possible parking fees are factored in.

“While exhibitors understand the new pressures that a weakened DVD market creates for their studio partners,” the ads read in part, “four decades of box-office growth and three straight years of record-breaking box office argue for caution in tampering with a business model that clearly works.”

“Be careful before you cook us all, yourselves included,” wrote Gregory S. Marcus, the chief executive of the Marcus Corporation — the parent of Marcus Theatres, a Midwest exhibitor — in a July opinion article in The Hollywood Reporter.

Exhibitors are also arguing that the copy-blocking technology approved by the F.C.C. won’t work. “If past is prologue, technological locks will be overcome with technological crowbars,” the ads from the National Association of Theater Owners stated.

Adding to this argument was news last week that hackers were able to crack Intel technology used to securely transmit high-definition content between televisions and set-top boxes. (Intel played down the threat, saying that a special device would need to be built to exploit the information.)

Theater owners mean business. When Sony Pictures Entertainment tried a test with“Cloudy With a Chance of Meatballs” last year — owners of Internet-connected Bravia televisions could rent that movie before it was available on DVD, for $25 for a month — some theaters yanked the film.

In a similar showdown, Disney’s decision last spring to release “Alice in Wonderland” early on DVD was greeted by boycott calls from theater owners, most forcefully in Britain.

Studio executives say they are going to risk premium V.O.D. anyway, contending that they have little choice, given the DVD downturn. Besides, analysts estimate that 90 percent of a film’s admissions revenue is now generated within 30 days of its release.

(The rebuttal from theater owners is that the data doesn’t take into account second-run and discount theaters, and that there are big exceptions: “Inception,” for instance, was still raking in millions in theaters 10 weeks after its release.)

Protecting the box office is crucial for studios, and for reasons beyond the importance of their ticket-revenue share. For a start, under long-term contracts, premium television networks like HBO and Showtime typically pay for movies using formulas based on domestic box-office revenue. So shrinking ticket sales would also mean shrinking television revenue.

Studios also rely on big theatrical runs to catapult titles into the public consciousness. Without all of the hoopla surrounding a hit at the multiplex — the lines, the marquees, the buzz in the corridors afterward — movies start to feel an awful lot like their more commodified cousin, television.

SO which studio is going to go first, and when? All six of the major studios declined to comment for this article. But multiple movie executives with deep knowledge of the landscape say the first quarter of next year is the target, in part because big Christmas releases like “The Chronicles of Narnia: The Voyage of the Dawn Treader” and “Tron: Legacy” give studios extra leverage.

The studios that seem most likely to make a move are Disney, 20th Century Fox and Warner Brothers. In part because its size gives it more muscle than other studios, Warner has historically shown a willingness to rewrite the blueprints for the home entertainment business. It was Warner, for instance, that aggressively pushed to release movies on traditional V.O.D. at the same time the DVDs arrived in stores.

One thing is certain, said a top motion picture agent who requested anonymity so as not to anger his contacts in the industry: “Studios have made it clear they are not interested in testing the waters on premium V.O.D. Once they start, they’re going to do it.”