A New Godzilla Movie is in the Works 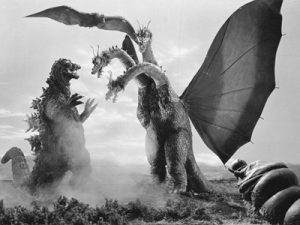 After reading the news on the a potential new Godzilla movie, I bursted out saying “MAN IN SUIT! MAN IN SUIT!”  Because what I read, is nothing short of spectacular and I realized that finally someone is going to take this franchise to the next level and make it AWESOME once again.

Now we all remember that turd of a film from the late 90’s with Ferris Bueller called Godzilla.  And we remember how bad that film was.  So bad that Cowdefender thought Sarah Jessica Parker was in the film.  It was just a hard film to watch because it made no sense whatsoever and it should have NOT been called GODZILLA.  It should have been called Ferris Bueller’s Day Off 2: Giant Lizards Defend Themselves or something to that tune.

As of now Legendary Pictures is working on a new Godzilla film with Brian Rogers producing.

“They’re taking more of a BATMAN BEGINS/DARK KNIGHT approach to re-developing the GODZILLA lore (by implication – much of GODZILLA’s concept will remain essentially what we saw in the “classic” mythos, but with some tweaking and nudging to get it to a loftier place . This is quite unlike the approach taken when Sony Americanized Godzilla back in the 90s).”

“Current plans are for Godzilla to fight one, or more, monster opponents in the new movie.”

Check out the full interview below.

One thought on “A New Godzilla Movie is in the Works”