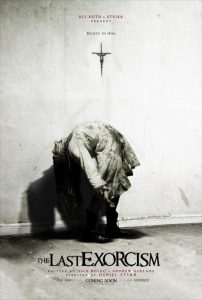 I should let you know that the less you know about The Last Exorcism, the better it will be for you.  If you are a fan of horror movies in general then I believe you will enjoy this film.

Now I am sure you have all seen the previews and viral marketing for this movie on the internet or chat roulette and other postings that show special effects and CGI.  Well I can tell you that there is none of that in the film except for a little hint of it.

This story is told as a documentary in the vein of Blair Witch or any of the Christopher Guest movies.  It follows a man by the name of Cotton who is a man who has completely lost his faith in religion and GOD.  But he still chooses to be the minister of a church and lead his congregants in prayer.  He is also known for performing around 150 exorcisms in his lifetime.

He hires a documentary crew to show people how GOD is not real and exorcism is not real.  This shows how he adds strings and smoke and mirrors to show the illusion that GOD or a demon has taken control of somebody.  This is fairly humorous and sad at the same time.  I’m sure people actually do this.

So basically Cotton tells us that he gets letters quite a bit from people writing to him to come and perform an exorcism.  He picks a random one and he and his film crew drive out to a small country town to a family where this supposed event is taking place.

From here the story goes into two stages of an exorcism.  The first one is Cotton doing all the fake magical illusions to make it seem that he is really exorcising demons out of his subject.

I do not want to spoil the rest for you for it promises to scare you and have a few big surprises.  The twists will have you discussing the film in whole for the next couple of days.  The film gets more intense as the film plays out and as Cotton is getting more convinced that this exorcism might be the real thing.  Trust me.  This will scare you.  The climax of the film is very rewarding and not only will you want to see more, but you will draw your own conclusions.

The main girl in this film is brilliant.  I hope to see more from her.  The way she bends and transforms is frightening.

The big twist ending had me wanting more because what takes place is some serious GRADE A scary shit that will leave you and your friends discussing throughout the night.

Loved it.  Congrats to Eli Roth and Daniel Stamm.